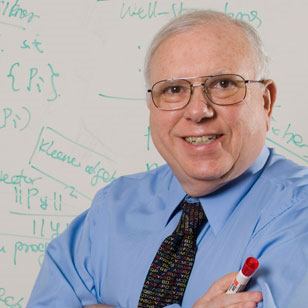 J. Michael Dunn has been awarded grants from NSF, NEH, ACLS, and has visited, among other places, at the Australian National University, Oxford University, the University of Melbourne, and the University of Massachusetts Amherst . He is listed in Who's Who in America and Who's Who in the World. He is a winner of the Techpoint (Indiana Information Technology Association) Mira Award for Outstanding Information Technology Educator. He was awarded the IUB Provost’s Medal, and was made a Sagamore of the Wabash by the Governor of Indiana. He is a Fellow of the American Academy of Arts and Sciences. Dunn's research focuses on information based logics and relations between logic and computer science. He is particularly interested in so-called "sub-structural logics" including intuitionistic logic, relevance logic, linear logic, BCK-logic, and the Lambek Calculus. He has developed an algebraic approach to these and many other logics under the heading of "gaggle theory" (for generalized galois logics), which is contained in a series of papers, his book with Gary Hardegree Algebraic Methods in Philosophical Logic (Oxford, 2001), and a book with Katalin Bimbó Generalized Galois Logics: Relational Semantics of Nonclassical Logical Calculi. (CSLI Publications, 2008). He has done recent work on the relationship of quantum logic to quantum computation and on subjective probability in the context of incomplete and conflicting information. He has a general interest in cognitive science and the philosophy of mind. Although Dunn is retired he stays very active in his research. Dunn has recently been honored by the book J. Michael Dunn on Information Based Logic, edited by Katalin Bimbo and appearing in Springer's series Outstanding Contributions to Logic. Further information, including the autobiography Dunn wrote, can be found in the “Front Matter” available online at http://link.springer.com/book/10.1007%2F978-3-319-29300-4.