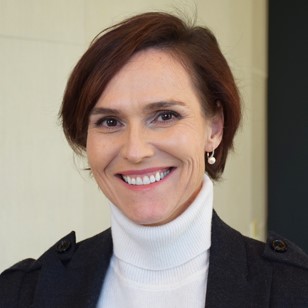 Martina Barnas is an Adjunct Professor of Computer Science at the School of Informatics, Computing, and Engineering at Indiana University Bloomington. She served as Senior Assistant Dean for Research from 2016 to 2019.

Barnas received her undergraduate degree in Mathematical Physics from Comenius University, Bratislava, Slovakia, and she earned her Ph.D. in Physics from The Ohio State University where she worked with Robert Perry and Nobel Prize Laureate Kenneth G. Wilson on light-front renormalization group approach to QCD, an innovative theoretical approach to determine properties of particles. She also held academic positions with the Los Alamos National Laboratory and the University of Florida.

Moving away from theoretical physics to commercial sector, Barnas transitioned to research and development in electronics and computer science at Mentor Graphics Corporation. In 2004, she became the co-founder and chief scientist at MNB Technologies in Bloomington, helping to successfully acquire research and development grants in excess of $1.4 million while serving customers primarily in the defense sector. The company was named the 2005 Indiana Venture Idol Competition Finalist and earned the 2009 FUSE Award for Innovative Business of the Year.

Barnas returned to academia in 2012 to pursue her interest in educational research at the School of Education at IU until becoming a research faculty member with the Center for Research in Extreme Scale Technologies (CREST) in 2014. She took on the role as Director of Research Collaborations at SoIC in 2015, and established the ADR office and defined its mission. She was appointed Assistant Dean for Research in 2016.

Barnas has continued her research and education, earning a Master of Science in Learning and Developmental Sciences at the IU School of Education in 2016. She has co-authored four U.S. patent applications and has authored or co-authored 28 academic publications in physics. Since her return to academia, she has co-authored peer-reviewed publications in education research and computer science, served as a program chair for EduPar 2018, co-chair for EduPar 2019, proceedings chair for EduPar 2015, and program committee member for workshops associated with IEEE/NSF TCPP Curriculum Initiative, guest editor for a special issue of The Journal of Parallel and Distributed Computing, Keeping up with Technology: Teaching Parallel, Distributed and High-Performance Computing. Her current research interests include distributed graph algorithms, issues of performance modeling, plenoptics and computer science education.